Without ice cream there would be darkness and chaos.
– Don Kardong

Back in March I agreed to participate in a quilt challenge. It was called the “Ice Cream Social.” Each participant was given an ice cream flavor and needed to incorporate the color of that flavor in their quilt. The quilt could have a perimeter of no more than 100 inches and needed to include two embellishments, or “toppings.” Extra points if it was an ice cream themed quilt.

I was given jamoca almond fudge (brown & cream) for my flavor. I don’t use a lot of brown in my quilting. I’ve never done embellishments. And I’ve never done a quilt this small before.

I couldn’t figure out what I wanted to do for my quilt. I was stuck. But I figured I had till June to finish it so I could sit on it for a bit till inspiration struck.

I finished the quilt yesterday. My embellishments are the rick-rack between the center of the quilt and the border, seed beads on the ice cream, and red yo-yo cherries on top. It’s 20 inches high by 30 inches wide. Green and yellow are my extra fabric colors (the border is a green and yellow stripe with just a tiny line of blue that I used to pull the rick-rack and writing colors for).

The quilt just makes me smile. The ice cream scoops also reminded us of turtles, so there might be a turtle quilt some time in the future. 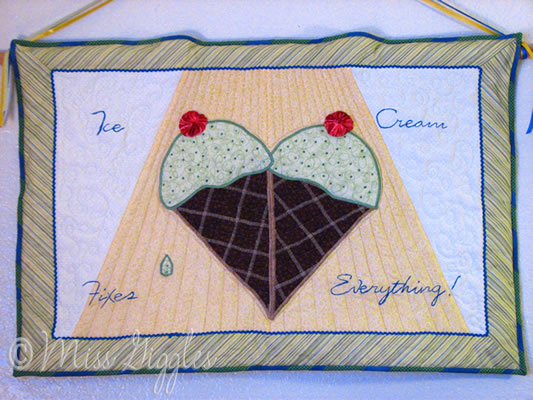 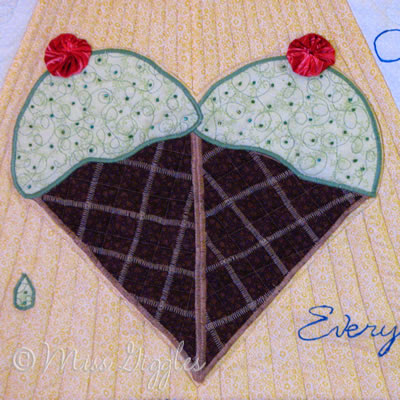 And now the story of the inspiration.

My thumb has been injured since January (I still can’t use normal scissors, but I can use my spring ones and a rotary cutter). It is slowly getting better, but this has definitely been a test of patience. I went to the doctor for the second time the end of February because my patience just wasn’t what I needed it to be and he referred me to a specialist. As I left the doctor that day, having heard his three possibilities for my thumb (another month with a splint, surgery, permanent injury) and not liking the idea of any of them, at all, I was even more frustrated. I found a computer and sent Brett an email letting him know, as quickly as I could, what the doctor had said and how I was feeling. And then I went to my afternoon class.42D

Brett called when I got home from class. He said he knew it wouldn’t make everything better, but could he come take me out for ice cream. I almost started crying. It was the best and sweetest thing I could’ve heard right then.

That night, ice cream did make everything better.

Later, as I was thinking about what to do for an ice cream quilt, that came to mind. So I did two ice cream cones tilted together to make a heart. There is a ray of heavenly light shining on them (with sparkly gold thread quilting too). To finish it I used machine stitching to write, “Ice Cream Fixes Everything!”

Because sometimes, it really does.