The Olympics! (and quilting)

The Opening Ceremonies were great tonight. The drum segment was amazing. The musicality in their voices and the drums was just captivating.

I loved the HUGE LCD screen. And the painting that all the athletes put their foot prints on, what a great thing!

I want a dress like the one the lady wore when she was standing on top of the platform carried by the guys underneath. It was something about the silk road. The greens and yellows on that were gorgeous.

I love how the Parade of Nations couldn’t be alphabetical simply because there is no alphabet. And actually, I enjoyed the commentary during the Parade of Nations too, that was some fun interesting information. I like finding out what nations have just one or two athletes and cheering for them. I probably won’t see any of those athletes again.

That is a huge stadium, or there are some real small countries, if there are a couple of nations competing that could fit their entire population in the Birds Nest.

The “running” around the screen up at the top with the torch was beautiful. I love how they used scrolls throughout the whole thing. Those fireworks are the best I have ever seen (and why wouldn’t they be, China invented them).

And I have to say that many of the Olympic themed commercials have me cracking up.

The quilting – I have my spool quilt up on frames again. The idea is to get as much, if not all, of it quilted by the closing ceremonies. I have a lot of quilting to do over the next 17 days. Wish me luck in my large undertaking. 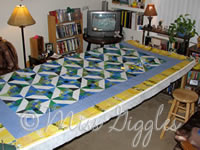 The post The Olympics! (and quilting) first appeared on Random Giggles

One shared thought about The Olympics! (and quilting)