I’m a groupie. But I’m not your normal groupie. I’m a news groupie. More particularly, KSL news in Salt Lake City. And I have a source for my addiction too. A friend works there, and I really like having that inside contact. Last year he helped me meet Mark Eubank when he retired. 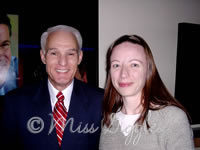 That was so neat. I’ve watched him do the weather for as long as I can remember. He’s the best weatherman. Now I watch his son on the same station.

Last year for Christmas I even got autographed photos of Mark Eubank, Dick Nourse, Bruce Lindsay, Nadine Wimmer, Carole Mikita, and Len Randolph. I have them framed in my living room. There was happy clapping when I saw them.

This year Dick Nourse is retiring. Tonight will be his last broadcast. Last night they had an open house where people could come and greet him and thank him for 43 years of doing the news. I wasn’t going to miss this. And I didn’t. 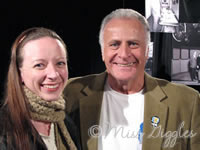 One reason I like that news station so much is because it’s the one my parents watched when we lived in Utah. We moved just before I turned nine. And it was real comforting to come back to BYU almost ten years later and be able to watch the same people doing the news. And I’ve watched them for the last 11 years now.

After talking with Dick Nourse and getting that picture, my friend had to rush to be on set for the 6:00 news. He said I could watch if I wanted to. I’m sure if he knew how that idea made my heart speed up just a little, he’d laugh at me. I got to sit on a chair back behind the cameras. They even got me a headset so I could hear what the director was saying. It was so COOL!! The news will always seem just a little different now that I’ve seen it from that perspective. 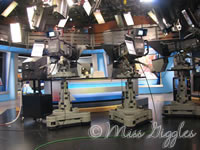 The view from where I was sitting.

The news hour goes a lot faster when you are there with them. I had a lot of fun watching everything that goes on. The weathermen still amaze me. He’s standing in front of a big green screen, and yet he can point at the exact spot on the weather map that he is talking about. That’s some amazing coordination there. 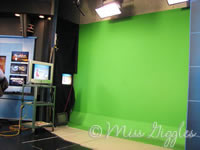 That was the bestest news cast ever. Yeah me!

The post I’m a groupie first appeared on Random Giggles

2 shared thoughts about I’m a groupie