When I lived in Utah I had a goal to attend every LDS temple in the state. (Attending every temple in the world has become an impossible task with more than 130 of them. However that would be a great way to travel the world.) When I left Utah I had been to all but Manti, Monticello, and St. George. Melissa and I had gone to Ogden and Logan in the same day once (and we drove past Mt. Timpanogos, Jordan River, Salt Lake and Bountiful to get there). Since I moved from Utah they’ve gone and built some more so I doubt I’ll ever get to all the Utah ones.

But as of Saturday Brett and I have been to every temple in Arizona. And just in time as there are two more under construction right now. I’ve had three birthdays with him now (one when we were engaged and two now that we’re married). In 2009 we went to the Mesa Temple for my birthday (we are at Mesa pretty much monthly, but birthdays are special). In 2010 we went to the newly dedicated Gila Valley Temple (check out this video showing the interior of the Gila Valley Temple). And this past weekend we took an overnight weekend and drove up to the Snowflake Temple. 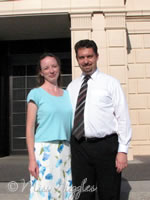 I look forward to many more photos just like these.