I am planning to run a marathon next month. Several people think that is crazy. Last week on my long run I injured my peroneal tendon, the peroneus longus tendon to be exact. This has prompted a few more comments about the sanity of a person who would run marathons. Now, I admit I have moments where sanity might not be my strong point, and a marathon might be one of those, but there is a logic to my desire.42D 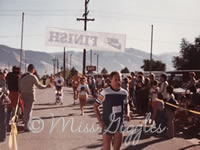 I have been a runner since birth. My dad ran me with me when I was a baby, pushing me in a stroller. They didn’t have fancy running strollers back then, and my mom has told me that my dad and I went through several strollers, wearing them out with all the running.

I ran my first race – the Brigham Street Mile in Salt Lake City, when I was 3. There’s a picture of my dad and I running the race hand in hand. 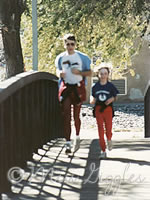 We’ve run a lot of races together over the years.

Growing up my dad and I would run together every summer before he’d go to work. We’d get up early and go running and then he’d shower and go to work and I’d go back to sleep (I’m not much of a morning person). I ran track in junior high too. I was a distance runner, the 800 and the mile mostly. Running has always been a part of my life.

In 1997, the LDS Church celebrated the 150th anniversary of the pioneers arriving in the Salt Lake valley on July 24, 1847. The festivities include one of the best parades in my opinion and fireworks, but also a marathon that starts back in the mountains and runs down into the city along basically the same route the pioneers took down from the mountains. The marathon route also went down the parade route the last couple of miles if you got there in time. So all the people camping out waiting for the parade could cheer you on at the end. 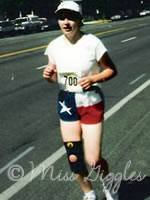 My dad had completed a marathon before, and since he and I like to run together, we signed up to run the Deseret News Marathon together on July 24, 1997. By running together I mean we started at the same time and he was at the finish line when I got there. I also saw him at the one part of the route where you doubled back on what you already ran. I have on a knee brace in this picture because I had dislocated my knee a year and a half earlier.

It was a great experience for me. I think I spent the first half of the marathon in disbelief that I was actually running a marathon. I didn’t do much thinking the second half so I’m not sure what was going through my mind at that time. And that night my legs had decided they didn’t want to listen to my brain any more. But it was great. I didn’t finish early enough to run down the parade route. But the people who were out in front of their houses cheering us on were great. I remember one little kid standing out on the corner handing out orange slices and Otter Pops. The orange slice was very much appreciated. 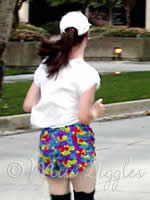 In 2004, turning 26, I wanted to run the same marathon again. I liked the idea of running 26 miles for 26 years. And the Deseret News Marathon is the day after my birthday. But I ran out of training time, having gone on a month long road trip the month before, so I ran the 10K instead. I figured that would be more exciting than simply running the 5K. I can run a 5K just about any day. This one needed to be exciting.

This time around I had two knee braces on. The left knee had gotten a bit jealous and had it’s moments of not agreeing with what I wanted it to do. But it was a real fun race. I finished in just under one hour. That was a great time for me considering I pretty much hadn’t trained at all and was running it very randomly. I had blisters at the end of the run. That doesn’t happen to me often. But the run was real good. I felt great afterwards. There is such a high when you run.

The marathon route has changed so you don’t run down the parade route any more if you run the marathon. But the 10K still does. And running past all those lazy people lying on the ground waiting for the parade really pushed me on to keep running the whole thing. It was a great run. 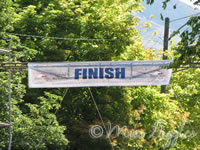 I ran the 10K again last year. I think I wanted to do it just because. It had also been ten years since I ran the marathon. And during the first miles I was thinking about running the marathon ten years ago, only this time, no knee braces, at all. I’d been exercising all summer (part of a bet, that I won). So I was in better shape for it last year than I had been in the past. I blogged about it then.

This year I’m turning 30, so I thought again that I’d want to run the marathon, my marathon, the one right after my birthday, to celebrate. Because my dad has always been a part of my running, I wanted him to run it with me too. So back in October we agreed we would both train to qualify for Boston 2009. As a 30 year old woman I’ll have to finish a qualifying race in 3:40. My dad gets five more minutes and has to run in under 3:45 to qualify. He wanted to run Boston to celebrate turning 50, but that didn’t work out back then. I was in Brasil then too, so I wouldn’t have been running it with him then. So we are going for it this year, together.

So while my injury right now probably means that a 3:40 time next month might be slightly out of my reach and I’ll probably be running the Tucson marathon in December to qualify for Boston – maybe now you can see why running this marathon, now, with my dad, is more than just a physical challenge and any qualifying marathon would do, it’s an emotionally charged run, one I’m not ready to give up.

The post The Marathon first appeared on Random Giggles

One shared thought about The Marathon