In November I made a comprehensive list of all my major injuries since 1996 (E ao que sofre dores). Unfortunately, I think I can already update it for 2009 and we aren’t even two weeks into the year yet.

I woke up on New Year’s Day, of all days, with what turned out to be a mild case of pinkeye in my right eye associated with the cold I also woke up miserable with. Never had pinkeye before. And I’d just barely gotten my left eye cleared up from the blood vessel that had burst in early December. 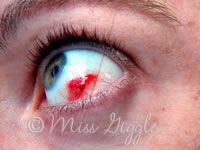 my eye in December

I was beyond careful though, and while my right eye was red for several days, extra goopy, and I woke up with my eye sealed shut a few times, I never touched my eye unless I could wash my hands right after. So it never passed to my other eye, and as near as I can tell, nobody I know caught it either. I figure I must have picked it up on my flights on the 30th. I’ve been wearing my glasses for over a month now. Good thing I picked out some cute ones last year.

Then on the 8th I decided to get the boxes out of storage so I could take down my Christmas decorations. At some point doing that I must have over-extended my right thumb, or something, because I woke up Friday morning with it hurting to do just about anything. An opposable thumb is a great thing to have, until using it to do anything that requires an opposable thumb hurts. Basically it seems I have a small sprain on my thumb. I’ve been taping it to the rest of my hand at night and that is helping. I bought the tape to tape my ankle with last summer when I strained my ankle. That wasn’t a problem taping my leg, but that’s because I shave my legs. I don’t shave my hand, and taking the tape off hurts! But my thumb is feeling better, so I guess I’ll do it a few more times. Of all the stupid injuries!

But maybe this means the rest of 2009 will be injury free. And with more marathon training on the schedule for the year, that would be great.