We have at least one photo of us for every month we’ve been married. I’ve been adding them to the wall paper on my computer each month and we’ve enjoyed watching the screen fill in until last month when we added the 48th photo. We both agreed we should do something with all of them and both considered simply printing them and putting them on the wall.

A week before our anniversary an idea struck while I was up at 4am nursing Iddo. Could I make it work? It took a few more 4ams but I figured it out.

A few years ago I bought a Harry Potter calendar in the shape of a cube. The cube is made of 8 smaller cubes and unfolds in such a way that all 48 faces of the 8 cubes are visible at one point. For the calendar this means that the first six months are visible when it is folded one way and when you open it up and fold it the other way the other six months are visible. They sell these cubes for brand recognition and advertising and call them “magic cubes” and tout their “fiddle factor” (customers are constantly fiddling with the object and your brand becomes ingrained in their minds). The important thing for me was the 48 small cube faces that were available.

I bought a package of 8 1.25″ wooden blocks at Hobby Lobby, printed up our monthly photos at 1.25″ square, got out my mod podge and some clear enamel spray, pulled out an egg carton, and got to work.

The first thing I did was use masking tape to put together the larger cube so it would fold right and wrote on each of the 48 faces which month went where and in what direction. My first thought had been to put all the Novembers together and so forth but I decided to do them chronologically instead. Because you can at most see three sides of a cube at a time I arranged it so you could see one whole year worth at a time.

After marking all the sides I pulled off the tape, cut out the pictures, and started attaching them to the blocks. I did one layer of mod podge underneath each photo to hold it on and two on top to protect it. I then sprayed all the sides to seal them even further. The egg carton came in very handy for holding everything while it dried. 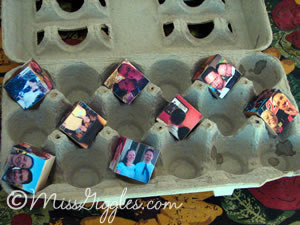 I used small strips of clear packing tape for the hinges and the whole thing turned out great. We’ve definitely enjoyed fiddling with it and seeing the photos somewhere other than just on my computer screen. 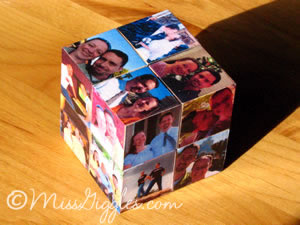 5 shared thoughts about Four year photos and a magic cube