Can a game be any more nerve wracking? No. I don’t think so. I didn’t breathe easy the whole game. It was a beautiful day for a game though. The weather was clear and sunny with very little breeze. It was still real cold, but with a sold-out stadium, there were enough people around that it didn’t get too cold. There were moments when I honestly couldn’t tell if I was shaking from cold or nerves.

It was a tough fought game on both sides. The defense on both teams were amazing. For a long time I thought it was going to be a game of field goals only, which was fine because we had three and they only had one.

The crowd was great. The last minute or so of the third quarter, which of course lasted a good five minutes, I don’t think I heard a single thing because the crowd was making so much noise. I did my own fair share of yelling as well and my throat feels just a tad scratchy right now. It was all worth it though.

A few incompletes later and BYU had won!! Even more yelling and jumping up and down. It most definitely was a good day for a football game. Despite the signs that say entering the field is prohibited, I joined the crowd on the field, something I’d never done before. I just wanted to stand on that field before leaving Utah. The season tickets this year were the best $100 I’ve spent in a long time. This game alone was worth it. 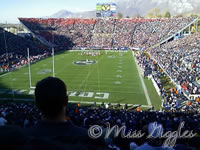 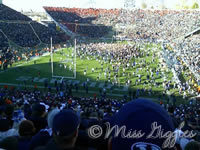 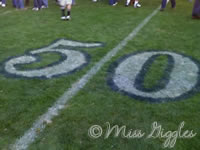 I just counted, and this is only the second BYU vs. Utah football game I’ve attended. I had season tickets for the 1996, 1997, and 1998 seasons. The game was only in Provo in 1997 those years. For the 1999-2000 seasons I was on my mission. In 2001 I was in Mexico and Kentucky, so I didn’t have season tickets that year. After graduating I went to only two or three games until I bought season tickets this year. That is far too many games for me to miss.

The post 4th and 18 first appeared on Random Giggles

2 shared thoughts about 4th and 18