12 November 2016, 4:45 pm by Giggles
Categories: Quilting/Sewing/Knitting/Crafting
Find me on Google+

When we got married we had feathered pens at our reception for people to use two write some advice on our guest cards that took the place of a guest book. Those pens were extremely important to Brett, particularly the feather part. Important because he knew I wanted him to have an opinion on things so he chose the pens as one of those things. I needed any pens we used to be acid free and since I couldn’t find any feathered pens in the store that said they were, I decided that just meant I’d have to make our own. So here’s how I did it. 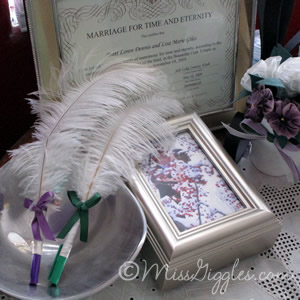 I still use these pens for writing important things in my journal, like the stories of our kids’ births. They’re kind of fun to have around.