My understanding of quantum physics is limited to some books written for the general public on the subject, several NOVA episodes, and articles in Scientific American. I find the whole topic fascinating but have no desire to actually sit down and do the math. However, I would like to propose that toddlers are in effect a macro-quantum particle. 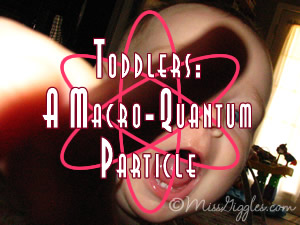 First, we are pretty sure our particular toddler has figured out quantum entanglement on a macro scale. Entanglement is when two or more quantum particles interact in such a way that a change to one will automatically affect the other even if there appears to be no way for the second particle to know what happened to the first. This is the theoretical key behind transporter technology. Einstein called it “spooky action at a distance.”

“Spooky” certainly describes certain toddler behaviors. For instance I’ll see her sitting in the basket of blankets and look away for just a second and then she’s sitting in her toy box. The only way she could switch places that fast is through quantum entanglement and transporter technology. Unfortunately we have yet to decipher her babbling explanation of the technology and therefore cannot share her wisdom with the world.

Secondly, the Heisenberg Uncertainty Principle states that the more precisely you measure a quality of a quantum particle, such as position, velocity, or spin, the less precisely you can measure any of its other qualities. You can only be sure of one aspect of the particle at a time because observing one, even just the presence of the observation equipment, changes the others. This is because quantum particles have a wave-particle duality to their matter.

Toddlers also appear to have a wave-particle duality. This is not so readily apparent when observing with the naked eye. However the presence of observational equipment, such as the camera, completely changes the behavior. One sure way to change whatever cute thing our toddler is doing is to try to record the behavior with the camera. The camera does not even necessarily need to be turned on, just in view. The presence of a second naked-eye observer can also have a similar effect.

I will continue to make my observations, such as they may be. But I think the evidence is adding up nicely.