Me, the Runner, Part 3: College and Beyond

I mentioned at the end of Part 2 that I’d dislocated my knee at the end of high school. But I still got back to running when I could. At BYU I did the inaugural Rex E. Lee Memorial 5K my freshman year and every year I was at school. Getting into a regular running routine was a bit of a challenge as I also got into the routine of living on my own, but things went better when I was running regularly.

1997 was the sesquicentennial of the Mormon pioneers arriving in the Salt Lake valley. As part of the celebrations for Pioneer Day, July 24th, there is the Deseret News Marathon that starts in the mountains and follows the route of the pioneers down the mountains and into town. My dad and I decided we would run the marathon in honor of the last wagons, the ones who had to breathe the dust of everyone else ahead of them. And that’s pretty much where I finished. But I officially finished. My dad finished ahead of me but came back to run the last bit with me.

In 2004 I ran my first 10K, part of the Deseret News Marathon. The runners never really thin out and the race finishes running down the parade route. With all of that pushing me on I finished in 59:45. It was a great race.

At midnight on December 31, 2007 I bundled up and went for a 3 mile run to get 2008 off to a running start. It became a tradition. One that has been modified most often to a walk that “starts on the right foot” due to being sick, or having small children, at New Year’s. But I hope to get the years off to a running start again soon.

In 2008 I turned 30 and my dad and I again ran the Deseret News Marathon, which is the day after my birthday. We both had the goal to qualify for Boston but his hip started giving him grief near the end and I had issues with my ankle through training and the race. But we finished. So the race didn’t beat us. 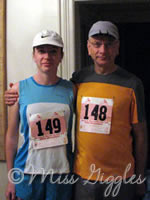 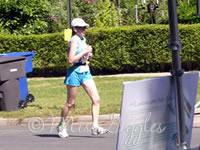 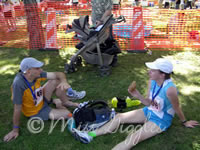 In 2008 I also moved to Tucson and that September I ran an 11 mile trail race in the mountains north of town and decided that I am definitely not a trail runner. But finding races in Tucson that aren’t on Sunday is hard.

And that’s a good place to end part 3. Part 4 I’ll talk about running since getting married and having children.

The post Me, the Runner, Part 3: College and Beyond first appeared on Random Giggles

4 shared thoughts about Me, the Runner, Part 3: College and Beyond