How to Expect the Unexpected

When last we left our “how to” series (How to Make a Baby and How to Make a Sibling (or two)) I thought we’d written the final chapter and sent it to press. Turns out I was wrong. God had a very exciting epilogue he wanted to write. An epilogue we didn’t find out about until it was well on its way to the printer. But that’s part of the story. And I’m getting ahead of myself. So here’s what we believe is the exciting conclusion with the wonderfully unexpected.

First, some back story.

Have surgery in 2012 to remove your endometriosis. Get pregnant right away and have Iddo. Breastfeed for a year. All of that holding off ovulation and thus the regrowth of your endometriosis. Ovulate once and head back to the doctor. Ovulate again and do round #7 of IVF and not get pregnant. Ovulate again and do round #8 of IVF and have twins, Shimri and Shimei. More pregnancy and breastfeeding to continue to hold off more ovulation (this time till 16 months after the babies are born), because who wants to menstruate? Especially if it means the eventual return of painful periods as the endometriosis grows back. Don’t go back to the doctor after that first post-partum ovulation after the twins because you don’t have any more embryos in the freezer and you’ve felt very strongly that this is your family here on earth and you are very satisfied with it and loving it and living so you have no regrets for anything you did or didn’t do while your children are young.

To keep yourself running regularly, in May sign-up for a half-marathon to be run the coming February and start seriously training for it in the fall when the weather starts to get cooler, getting in some real good miles and having some of the best runs of your life.

Joke with your husband one day in September that “if sex made babies, today would be a great day.”

Continue breastfeeding the twins because you said they could go for as long as they wanted to and they aren’t really interested in stopping yet. Find it odd that you haven’t menstruated again after that first post-partum cycle but chalk it up to the continuing breastfeeding because twins is a lot of breastfeeding, even though they are both only nursing 3-4 times a day at this point. Or maybe you have some ovarian cysts or something going on. Or thyroid problems (those run in your family). Have nursing portraits taken in October because you really want to remember this wonderful connection of breastfeeding you have with your children and you aren’t sure how long you’ll be able to do it and you know it’s passing quickly and will never come again.

Around Thanksgiving wonder why, if you aren’t gaining any weight, your belly is starting to not exactly fit your pants any more. Figure it must be because the twins did a number on your abdominal muscles and the longer distances you are running now are straining them so your guts are just kind of hanging there and your muscles can’t hold it all in any more.

One night while nursing the twins to bed feel some gas bubbles and remember what it was like to have a baby move inside you and for a moment feel a twinge of sadness that you’ll never feel that again.

Because while the pregnancy and breastfeeding can get rid of the endometriosis, there was one other reason you weren’t able to get pregnant before – you kill ALL of your husband’s sperm. And as far as you’re aware that reason still exists.

In January have someone at church come up to you all misty-eyed and ask if you are expecting. Reply that nope, you’re just getting fat. When they point out that you’ve been home sick quite a lot remind them that you have a toddler who seems to like to lick everything so the whole family is sick on a regular basis right now.

In February sit in church one Sunday and wonder why that gas bubble isn’t moving but keeps bubbling in the same spot.

On Tuesday get all the kids in the car after spending two hours walking around at the children’s museum and when you finally sit down to drive home have a tightening in your abdomen that you’d describe as a Braxton Hicks contraction if you were pregnant. But you aren’t pregnant. You can’t be pregnant. So you don’t know what that was. All the same, send a text to your husband saying, “Confession: I’m not so sure I couldn’t be pregnant any more.”
To which he replies, “What makes you unsure?”
“Abdominal sensations.”
“You should take a test.”
“I know. I only have expired ones at home.”
“We can fix that. I don’t think they’re too expensive.”

On Wednesday send your husband a shopping list of things to pick up from the grocery store on his way home from work: “Pineapple tidbits. Milk. Bananas. And a pregnancy test if you want. Check with me on type before purchasing. They are not all equal.” He sends you a photo of the shelf at the grocery store and you indicate which one to get.

Thursday morning get up and take the test before heading out for your morning run. Be sure it’s going to come back negative because you don’t get pregnant without extreme help. When the test line shows up before you’ve even really put the test down react with complete shock. Romantically go back into the bedroom and toss it at your husband, who knew it was going to be positive and is already figuring out how to save for college for four kids instead of just three now.

Call the OB and the earliest they can get you in is a month out. Which for normal pregnancies is completely normal. But this isn’t normal. You are far enough along already that you’re feeling regular movements, which clearly puts you somewhere in the 2nd trimester already. Call back on Monday and they have a cancellation for the next morning. At your first appointment have a fundal height consistent with 22 weeks pregnant.

Schedule your anatomy scan for Friday. Bring your oldest daughter because she’ll find it interesting. She does. Have the anatomy scan measure you at 23 weeks. Check your calendar and realize that the joke you made way back in September about sex making babies wasn’t exactly a joke. You’ll be exactly 23 weeks pregnant on Sunday. Apparently your sperm killing abilities were related to your endometriosis. And with the endometriosis gone for so long now, that’s gone too. Who knew?!

Have the ultrasound tech write in a card if you are having a boy or a girl. Go home and pick up your other two kids and take everyone out for ice cream. Open the card and discover that Izri (and it took two days of intense searching through the books of Chronicles and a lot of back and forth to decide on that name) is a boy! Shimei gets a brother!

Search the internet and realize pretty much nobody has a way to announce both the fact that there’s a baby and if that baby is a boy or a girl at the same time and everyone else does two separate announcements. Joke with your husband that you’re going to announce the sex but keep the baby secret. Figure out a way to announce them both anyway.

You’ve only known you are pregnant for 8 days. And you’ve already mixed up his real name with his brother’s more than once, before you even knew he was a boy. He let you know early what his name is supposed to be.

The next day go buy all the fabric and yarn you’ll need to make him a hat, booties, flannel blanket, and a turtle quilt.

Since the pregnancy didn’t interfere with training at all and the training clearly hasn’t interfered with the pregnancy, decide to go ahead with your half marathon, definitely looking pregnant at 1 day shy of 24 weeks. Have a great race! Tear up a bit during the race because you’d wanted to run with your other pregnancies but because of complications you weren’t able to. Thank Izri for giving you this opportunity. Laugh a bit because this isn’t even his first race. His first race was the 5K you ran at the end of October while pushing the twins around the Boneyard. Run for one more month, just long enough to get to the 3rd trimester, and decide the ligament pain is just making it too hard any more. 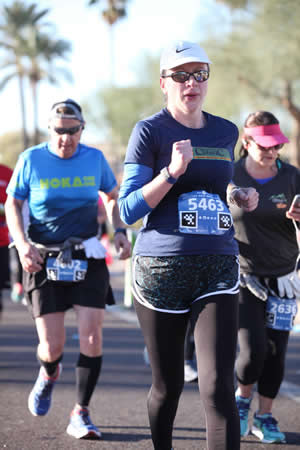 Start getting the list of things you need to get and do ready so that you’ll be prepared when this little guy comes. Video him moving several times because none of your other kids wiggled like this and it’s a bit crazy to watch your belly dance around like that.

Prepare for a VBAC and think your OB is on board until your appointment at 34 weeks 4 days when it’s clear she’s just giving lip service to the idea and doesn’t trust your body to be able to deliver this baby. Almost leave that appointment in tears but hold it together because your kids are with you and they’re already scared after watching the OB argue with you about the delivery. The next morning call the midwives office and start doing what you need to get your care transferred to them. Have one more appointment with the OB before that transfer is complete and have it confirmed that what was once a real good working relationship between you, she was great for the delivery of your other kids after all, just isn’t going to work out any more. Have your first appointment with the midwives at 37 weeks 3 days.

Since all of your other kids came at 38 weeks figure that’s when this one will come too. Nope. He’s doing things his own way.

At 40 weeks go to the hospital for an NST. Izri is doing well, but they still think he needs to come soon. Go home. Put the kids to bed. Shower. Get your bag. And go back to the hospital. Spend all day Monday trying to induce active labor. Finally get it started around 9:30pm. The midwife just calmly sitting on the foot of your bed. Tell her this baby is going to be born before midnight. She says, “Okay.” Your husband doesn’t believe you.

At 10:25pm give birth to an amazingly beautiful and healthy boy.

At 1:30am, with you and the baby fully transferred from the labor & delivery unit to the mother & baby unit, send your husband home to sleep because your little girl hasn’t slept well at all with you not there that day. Sing Izri his song and both of you doze off and on all night long.

After breakfast introduce your older three kids to their new brother. It’s a joyful introduction.

Come home Wednesday afternoon and be so glad to be home all as a family. A family of six. That’s a pretty good sized family. And it’s filled with joy.

6 shared thoughts about How to Expect the Unexpected